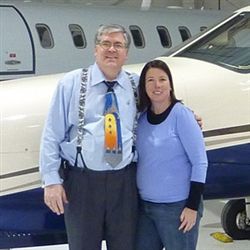 Although Dan Peterson '79 has rambled the globe and lived in 3 countries on 3 continents, he has always returned home to the people, places and schools of his youth. After graduating from Loyola Academy, Peterson earned a BS at Drake University and an MBA at Kellogg, before helping to create ZS Associates, a global sales and marketing consultancy. His business afforded him the opportunity to live in England for 5 years and Tokyo for five more. ZS now has over 1500 employees in 19 offices in 11 countries.
From the very start of his career, Dan and wife Melanie (Regina Dominican '81) took the time to remember his days as a Rambler at Loyola Academy. Loyola Legacy interviewed Dan about his decision to include Loyola in his will at a relatively young age.
How did Loyola Academy make a difference in your life?
My Loyola education made me much of the person I am today. During my years as a student, the teachers, administrators, and all the Jesuit staff at Loyola – along with my parents and siblings – had a profound effect on shaping my mind, my goals, and my life. I learned to think critically, question first impressions, and reach my own conclusions. I learned to stretch my abilities beyond expectations. Most important of all, I learned what it means to be "men for others." Ever since then, I have aspired to this ideal. Further, I have tried to instill that desire to be women and for others in our children.

What motivated you to make a legacy gift to Loyola Academy and what did you want to accomplish?
Gratitude. I am grateful that Loyola Academy was there for me, as a choice of schools to attend. I know that it is because of people who came before me that Loyola existed as a school option in 1970s. Therefore, I wanted to do my part to help ensure that Loyola will be there for future generations of young people to choose.

What specific event or circumstance prompted you to make a gift at the time of giving?
Not long after we were married, Melanie and I drew up wills and that prompted me to think about the people and organizations that I wanted to make a lasting impact upon and that I knew would always feel grateful. The first group I thought of then – and now - was Loyola Academy. I knew I wanted to leave something behind as a final gift to Loyola, no matter what I might do for Loyola throughout my life.

What type of gift did you make and what were your reasons?
I included a cash bequest to Loyola Academy in my will. It was so simple and easy to do. I included one sentence in my will and some months later a mailing from Loyola asking who had included Loyola in their wills. I wrote back that I had, and that was that.

How did the gesture make you feel and would you recommend that others make a similar gift?
It immediately gave me a warm feeling that I was doing the right thing - and I still have that feeling almost 20 years later. I would absolutely recommend it to others It is a quick and easy way to feel like you are doing something good for others, day after day, the impact of which will be felt by others long after you are gone.
Whatever path lay in the future for Dan and his family, one thing is certain. Through the generosity and foresight of dedicated alumni, parents and friends like Dan Peterson, Loyola Academy will continue its core mission of forming "women and men for others, leaders in service" for many generations of Ramblers to come.
Back