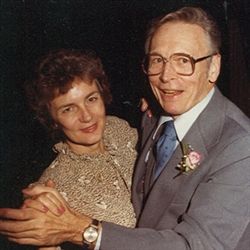 When it came time to sell his printing company, John Dwyer chose Loyola Academy as the beneficiary of a Charitable Remainder Trust. John never attended Loyola Academy yet his impact on the school and the students will live on for generations to come.
While establishing his successful paper business on the southwest side of Chicago in the 1960's, John and his wife, Joan, began to educate their young children in the area near O'Hare airport. They soon came to realize, however, that in order to pursue a dream of giving their children the best education during the most formative, high school years, they would have to make a significant change in geography.

During that time, the Glenbrook High School system was considered the finest in the country so their move to Northbrook in 1969 would seem to be a logical choice. But the Dwyer's motives were more calculated than that. Through their encouragement, their sons John and Patrick decided to attend Loyola Academy. Choosing Loyola established a theme in John Dwyer's life that will continue long after his death in 2001.

John Dwyer, Jr, '74 and Patrick Dwyer '78 enjoyed their years at Loyola Academy and, according to Joan, acknowledge their Jesuit education as an integral part of their success in life. John, Jr. encouraged his children to follow in his footsteps by choosing Loyola. John's girls Katie ('03) and Lauren ('01) were some of the first to complete their four years at Loyola since it became a co-educational institution.
For so many families, establishing a tradition of Loyola involvement that carries on for generations is blessing enough. Loyola Academy is, in turn, blessed and grateful to be a part of their family legacies. But for John Dwyer, Sr., there was one more choice to make.

In 1992, John Dwyer had a problem. His children were successfully grown and gone and his company was bought by another company which triggered the sale of his company stock. His problem was what to do with the cash that was generated by the sale of the stock, which had grown in value over the years.

Enter Joseph Nawrocki, his financial advisor. John presented Joe Nawrocki with a three part challenge: make sure that his wife Joan would be taken care of in her later life (John always predicted that Joan would outlive her "by decades"), leave a deferred inheritance for the children and minimize the taxes on the windfall. Joe, having extensive experience in estate planning and philanthropy, asked John if he had a favorite charity to which he would like to contribute. Without hesitation, John chose Loyola Academy because of the significant impact that Loyola had on the formation of his boys.

Joe immediately went to work with John's attorney to establish a Charitable Remainder Trust: an arrangement that would accomplish all of John's goals while creating a significant donation to Loyola Academy. While the name may seem complicated, the set up is quite simple to understand. First of all, the stock was transferred to the Trust. Because it is a charitable entity, the Trust was able to sell the stock without paying taxes on the gains. Joe Nawrocki invested the proceeds (approximately $1 million) into a group of quality mutual funds. From these investments, John and Joan receive 7% of the earnings as income for as long as either one of them lives.

It's that simple. But what about the children?
Because of the significant tax savings in this arrangement, Joe Nawrocki advised John to purchase a life insurance policy that corresponds to the value of the trust and will transfer, tax free, to his children upon the death of both of the parents. This practice of adding an insurance policy to benefit the heirs while establishing a Charitable Remainder Trust is a very common practice and encouraged by the government as a way of funding the myriad of worthy causes that exist in our world today.

As for the worthy cause of "educating young people to be leaders in service; women and men for others," the million dollar donation to Loyola academy is now worth $2.5 million! The donation continues to grow, once again tax free, through sound investment management set up by Joe Nawrocki. Loyola Academy owes a huge debt of gratitude to the Dwyer family and Joe Nawrocki for taking this financial path, not to mention future generations of students that are impacted by the benefit of a Jesuit education.

As for Joan Dwyer, her income from the growth of the investment has grown as well. But that is not the most important benefit. According to Joan Dwyer, it's peace of mind. Although she still misses John, she said "I sleep better at night knowing that Loyola is going to come into this. If I didn't know what was going to happen to this money, having four children and 8 grandchildren, it could disappear overnight. I sleep better knowing that it is going to a program that educates needy kids, or however Loyola chooses to use this. I know it's going to the right people. I trust in the discernment of the Loyola Administration."

Whatever choice that Loyola makes for the disposition of this gift, it will surely reflect the spirit and intention of the choice that John and Joan Dwyer made so many years ago, and the one that John made toward the end of his life. It will be a gift that keeps on giving in the form of a Jesuit Education at Loyola Academy.
Back