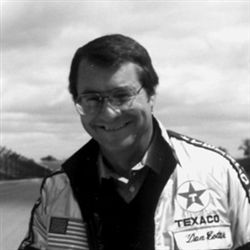 Dan Cotter's life reads like a 20th-century American classic: beginning in a small town in the Midwest during World War II, gaining depth and shape through his Jesuit education, cresting with leadership roles in the worlds of commerce and philanthropy and capped off with a well-considered memoir to guide his family and friends.
In his autobiography, Memories, it becomes apparent that Dan's success grew from seeds planted by the Jesuits at Loyola Academy at Dumbach Hall, in the middle of Loyola University's campus. These seeds were nurtured at Marquette University and flowered at Northwestern Business School. But he never stopped learning, as he embraced each new stage of his life and career like an eager student, willing to absorb whatever good graces came along and turning that good fortune into major business, athletic and philanthropic accomplishments.

"Even though I knew the Jesuits were tough, I also respected that they 'saved my butt,'" Dan writes in his memoir. "I wasn't the sharpest pencil in the drawer, but had this vague feeling that I had better get as good an education as I could because the world was a tough and competitive place. I thought a Jesuit education was going to work in my favor. I lived through it and came out a better person."

During the summers and after school, Dan would travel downtown to work for his dad, who was starting a new wholesale hardware business. Virtually nonexistent during World War II, the hardware business was beginning to blast off like a rocket and Dan's father, John M. Cotter, was there at the launching pad.
Cotter and Company grew rapidly in the 1950s by partnering with retail hardware stores throughout the country in one of the early franchise structures in American business. The company would manufacture and buy the products that eventually stocked the shelves of True Value Hardware stores, first in the United States and later in Canada and Europe. By the time Dan retired as president, CEO and chairman in 1999 of Cotter and Company (then called TruServ Corporation), the business was serving 7,000 hardware stores and doing $4.5 billion in wholesale.

Learning How to Give Back
Meanwhile, Dan was learning about how to give back, both to his alma mater and to the community around where the company was located. Its headquarters, near the intersection of Diversey and Clybourn, was a few yards away from the Lathrop Homes, which were owned by the Chicago Housing Authority. More than 900 families lived in this housing project, which was also the home of the Lathrop Boys Club, a subset of the larger Boys Clubs of Chicago.

For 30 years, Dan worked to create a better environment for the kids in Lathrop homes. He became the chairman of the club in the mid-1960s and continued to lead the organization well into the 1990s. Through the help of many individuals and organizations like NASCAR, he developed the Lathrop Championships Auto Racing Drivers Recognition dinner and raised more than $2 million for the club.
"During my business and racing life, I have received many awards and recognition, but there is one that stands above all others in my mind and heart. The single most important of all accolades was the day that the name of the Lathrop Girls and Boys Club was changed to the Daniel A. Cotter Girls and Boys Club."

How Dan became connected to car racing is another adventure. As an eighth-grader, Dan's father took him to the Indianapolis 500 and his life was forever changed. It started out with bus, train and streetcar trips to watch the races at Soldier Field, and ended up with Dan and driver Tom Sneva standing in Victory Lane at the Indianapolis 500.

"I know that I had reached the zenith of all race car owners. I was in rarefied territory. Many of my friends whom I had made in my racing career would never experience the feeling that I had on Memorial Day, May 29, 1983," Dan writes.

Building on Success
During all these years and up to 1999, Dan served as president, CEO, and chairman of Cotter and Company. As "head guy," he was able to accomplish some outstanding things and engineered some valuable mergers in his 42 years with the company. But the business success was secondary for Dan.

"The primary reward for me was forming many dear and lifetime friendships. Hardware is a people business. My happiest memories come from the folks I knew, not the deals I made," he wrote.

In retirement, Dan explored living on a farm in western Illinois and a five-year sojourn in San Miguel de Allende, Mexico. It was there that he and his wife, Mae, discovered a magnificent charity, Feed the Hungry, that builds kitchens in local schools and feeds the students one hot meal a day-all through volunteers and donations.

"Of all the charities with which I have ever been involved, this one taught me how blessed my life has been and how fortunate I am to live in America," Dan wrote. "When we left Mexico, this program was operating 35 kitchens and feeding more than 4,000 children every day."

Dan's latest adventure is living outside of Washington, D.C., in Leesburg, Virginia, near Mae's family. Lately, they find themselves exploring the Shenandoah Mountains or the nation's Capitol.

His memoirs end with a fitting conclusion to this story of his legacy: "I will always be grateful that these experiences, as well as too many more on which to elaborate, have become a part of the mosaic of my life."

Loyola Academy is grateful for Dan Cotter's life. We are also grateful for the gift that Dan has set aside from his estate for Loyola-the largest gift of all the many charities he helped to nurture and grow.
Back