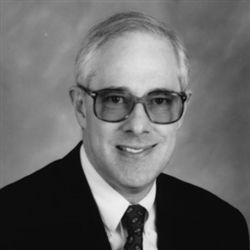 In the annals of Loyola Academy history, there are many alumni who will tell you that their lives were deeply affected by the gift that a Jesuit education bestowed on their young hearts and minds. One such man is Robert W. Tarjan from the Class of 1961.

Bob's was the first freshman class to attend the "new campus" in Wilmette following the school's move from Loyola University's Dumbach Hall in 1957. The stresses and strains of that transition must have played a pivotal role in Bob's life as the school took shape, literally, all around him.

Throughout his four years in the new facility, Bob experienced teachers who continually challenged him and his classmates to achieve their full potential academically. This began in freshman year with, as Bob says, "Father Richard Mackowski, S.J., who completed all the Latin I material in less than three quarters and then utilized supplemental Latin readings for the remainder of the year."

In senior year, Bob says, "Father Ryan instilled in me and my fellow classmates an inquisitive and analytical thought process, while at the same time demanding that continuous attention be paid to the details."

Bob attributes his success in business to the skills and values that he developed as a student at Loyola Academy. "Loyola Academy steeped me in the tradition of using my talents to the fullest and being a 'man for others.' I am very thankful for the education Loyola gave me, my two brothers, Mike '65 and Don '67, and my two sons, Robert '85 and Michael '90. The foundation Loyola provided us served as a springboard for future successes."

So it was only natural that as he was nearing his retirement as a senior executive with Kemper Insurance, he and his wife, Beth, would make provisions in their estate plan to benefit his two Loyola alma maters: Loyola Academy and Loyola University.
What was not so natural was his decision to go back to school following his retirement to obtain a teaching certificate and follow his dream to teach at the Academy. From 1998 to 2001, "Mr. Tarjan" taught honors algebra, tutored students in the math lab and served as faculty moderator for the yearbook.

Returning the Favor
For Bob, the idea of giving back was no idle whim. He felt fortunate that he was able to return the favor-as a teacher and through financial support for the school. While teaching at Loyola, Bob provided much-needed support for the Guardian Angel Fund. He was motivated to do so by the sudden passing of the mother of a student. Bob provided financial assistance for the student to pay for his books and part of his tuition.

"When I attended Loyola Academy, it was possible for a family of modest means to afford Loyola's tuition. That is no longer the case, especially if more than one student in a family wants to attend Loyola. For me personally, I believe I have a responsibility to give back to Loyola financially so that future students may benefit from the same opportunity I, my brothers and sons had."
These days, Bob is retired from both careers and lives in Savannah, Georgia, and still volunteers as a math tutor at St. Vincent's Academy, Savannah's Catholic girls high school. He still returns to Wilmette to visit and attend his class reunions, or just to walk the halls where he learned so much and taught so many. The school's physical plant may have changed some in all those years, but his care for the institution has not.

"Beth and I are both very pleased to be in a position to make a meaningful contribution to the future success of Loyola and to provide tuition assistance for future Ramblers. It feels good to know that we are able to help others have the same opportunity that I have valued so much for the past 51 years."
Back