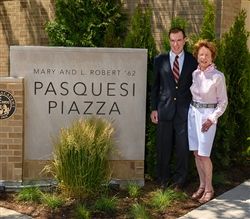 Responsibilty, discipline and care
When L. Robert Pasquesi '62 became a Rambler, he knew his life would never be the same. "From the moment I stepped foot on campus, my eyes were opened to academics, responsibility, discipline and care for others," Bob shared.
Bob and Mary's extended family have a rich history with Loyola. Many members from both of their families can be counted as alumni, and one of the Pasquesi cousins was even a physics teacher at Loyola for over 20 years. They were very proud to pass on the Loyola tradition to their sons, Robert J. '94 and James '00. In addition, Bob was a member of the Board of Trustees for six years.

So it was no surprise that Bob and Mary decided to make a transformative gift to name the recently built piazza "The Mary and L. Robert '62 Pasquesi Piazza." This gift has the added impact of significantly supporting the Leemputte Family Theater currently under construction. "Supporting Loyola was an easy decision,” Bob said. “LA has always been a major influence in my life."

The Pasquesi's chose to make their gift over several years combined with a bequest. "The process was very simple," Bob said. "For decades, we have been generous supporters of Loyola. What started when I was a student has stayed with me ever since."

"I hope our gift will not only help the school but also change the lives of students in need. There is nothing more satisfying. After all, Loyola changed my life."
Back