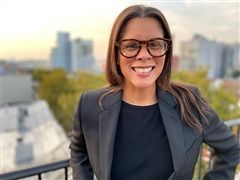 CEO, Prep for Prep
A passionate teacher and education leader, Ruth has more than a decade of experience serving in senior leadership positions at independent schools in New York City and Chicago. Prior to joining Prep for Prep, Ruth was Associate Principal at Francis W. Parker School, overseeing educational programs and operations for 900+ students in Chicago. She was a key member of its senior leadership team and created new initiatives including an endowed speaker series, and brought Dwight Vidale's Young Men of Color Symposium to the Midwest. Ruth has taught Prep for Prep students while at Little Red School House and Elisabeth Irwin High School (LREI), where she first served as an English teacher and later returned as High School Principal to oversee the expansion of the campus and student body.

Ruth earned her BA in English Literature from Connecticut College and her MA in English and American Literature from Brown University. She founded the Administrators of Color in Independent Schools Conference and also serves on the board of The Dovetail Project, a nonprofit that helps young African-American and Hispanic men with fatherhood.
Back