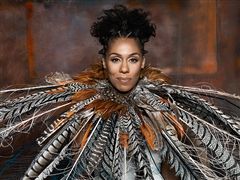 Sierra Leone Princess, Author, Humanitarian, Speaker
As an infant, Sarah was given up to foster care and adopted by a loving white family in West Virginia. She grew up contemplating and dealing with questions about her identity and her biracial roots. After learning that her biological mother had died when she was just 11, she found out that her father lived in a village in Sierra Leone, West Africa. She learned that she was from a royal family, a Mahaloi, the granddaughter of a Paramount Chief, with the status of a princess. She also learned of the difficulties and privations of the people in Sierra Leone resulting from a brutal 11-year civil war that ended in 2002.