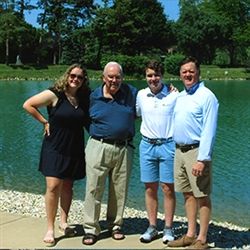 The Gift of Giving Back

For John H. Scheid, Class of 1953, Loyola Academy not only provided him a great education, Loyola also provided a family that pushed him to be a better person.
When John was in the second grade, his father died of a brain tumor. Later when John entered Loyola Academy in 1949 to pursue a Jesuit education, he was surprised and delighted to find his teachers began to play another important role in his life—father figure.

“I never really had a father figure until I started high school at Loyola Academy’s Lake Shore Campus,” John said. “The priests and Jesuit scholastics had such outstanding knowledge and personal integrity. They filled a big void in my life.”

After attending college and six months of active duty in the Army, John attended Loyola University Law School in Chicago. After practicing law for five years, John was offered a teaching position at the John Marshall Law School, where he taught for 45 years.

After a successful career, John decided to honor the school that enriched his life. “I want to pay Loyola Academy back, in some small way, for the marvelous education I received,” John said. “When my attorney asked me if I had any school or charitable organization to include in my estate plans, Loyola Academy immediately came to mind.”

John’s attorney recommended a gift through his living trust. “It was so easy to arrange,” said John.

John retired in 2012 but still maintains a small law practice, mostly for friends and family. He and his wife, Nancy Malone, have been married for 55 years. Their son, John H. Scheid Jr., also graduated from Loyola Academy in 1986. Today, two of John’s grandchildren, Katie ’22 and Colin ’24, currently attend Loyola Academy.

John is excited to see the Loyola legacy continue in his family, and he’s honored to be able to give back to the school that gave him an excellent education and a sense of family. “Loyola Academy gave me the best four years of my entire educational experience.”
Back