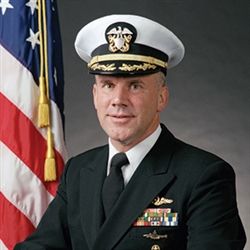 Plato wrote, “The direction in which education starts a man will determine his future life.” For Jim Baumstark, Class of 1960, his education at Loyola Academy put him on the path to attend the U.S. Naval Academy. He graduated from Annapolis in 1964 and entered the Navy’s Submarine Service, where he served for 28 years on six nuclear submarines during the Cold War, serving as captain of two of them. He retired from the Navy in 1992, having attained the rank of Captain. He then became a successful professional in the power and utility industry.
“I am a firm believer in the lifelong value of a strong education,” Jim said.

Jim arrived at Loyola Academy after attending Sacred Heart Elementary in Winnetka. “Loyola teachers encouraged us to think in a logical manner, using the Jesuit teaching methodology,” Jim recalled. “Couple that with my military indoctrination at the Naval Academy, and I’ve learned to think clearly and quickly in stressful situations, which has been key to whatever success I’ve had over the last 55-plus years.”

Jim also credits Loyola Academy with strengthening his spiritual growth. “Loyola imbued in me a strong set of moral and ethical values, embodied in Catholic principles, which I have to this day,” Jim said. These are the same values Jim and his wife, Pat, have passed on to their six children and 12 grandchildren.

Because Loyola Academy had such a positive impact on his life, Jim decided to make gifts to the school through distributions from his IRA as part of the RMD process. “I contact my plan administrator and initiate a Qualified Charitable Distribution (QCD), which allows me to give from my IRA directly to Loyola Academy,” Jim explained. “The amount of my QCD doesn’t count towards my taxable income for the year, so it’s a tax-wise way to give.”

“My Loyola Academy education was a great foundation for me,” Jim continued, “and I am proud and blessed to be able support future generations of students.”
Back