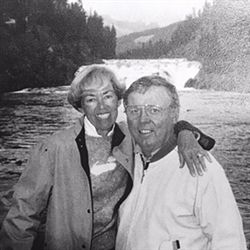 A Final Gift and a Family Legacy

The late William J. "Bill" Burns grew up on the Northwest Side of Chicago and was the second of six Irish children. He met the love of his life, Lois F. Eberle from the West Side of Chicago, during their high school years in the late 1940s. They would soon be crowned king and queen of their senior prom.
The Burns family's journey began on the Navy base in North Chicago, Illinois, where Bill was a dentist and Lois a nurse. They ventured south to Deerfield, Illinois, where Bill opened the doors to his own dental practice in 1955. Bill and Lois went on to have seven children (Linda LdM '72, Jean LdM '73, Mike '75, Tom '79, Judy LdM '80, Billy '82 and Jimmy '88) all of whom attended Holy Cross grade school and Loyola Academy or St. Louise de Marillac High School. Each of the kids went on to higher education.

Education was always paramount to Bill and Lois, but they didn’t view education solely from an academic perspective. They believed that the ideal foundation for academic excellence was faith-based and one that educated their children both intellectually and spiritually. Bill and Lois’s pride and joy came from their 23 grandchildren and five great-grandchildren. Recent Rambler graduates include Mike and Lisa's children Billy '08, Joey '10, Casey '13 and Jack '15; Billy and Heidi's children Corey '13, Johnny '14, Devin '16 and Riley '18; and the late Jimmy and Dawn's children Jimmy '19 and Lexi '21.

Athleticism has played a large role in the life of the Burns family, with Bill an avid golfer and pickleball player and Lois a slolam skiier until she was 70 years old. She also loved golf, swimming, cross-country skiing, biking, river rafting, roller skating and curling. Loyola football became near and dear to the whole family’s hearts as Tommy, Billy and Jimmy made their marks on the field. In fact, Jimmy was inducted into Loyola Academy's Hall of Fame in 2003. And the future generations continue this legacy of success, with Billy and Heidi's children Corey, Devin and Riley going on to play D1 soccer at the University of Iowa.

Beyond a strong focus on family (including their siblings and monthly family club events), friends were always important to Bill and Lois. From the neighborhood crew, Holy Cross friends, Exmoor partners and the "nongourmet" group to their paddle, golf and curling teammates and bridge club ladies, Bill and Lois cherished their friends. One group in particular had a lasting impression on them: "The Loyola Gang." What started as their comrades in the football stands would later blossom into lifelong friendships with families including the Aherns, Clarks, Coughlans, Donohoes, Mitchells, Rollinses, Skinners and Goods. Bill and Lois never took their friends for granted and their list of those whom they counted among them kept growing and growing over the years.

Finding hope in tragedy
While always thankful for their blessings in life, the Burns family met with tragedy in 2003 when the youngest of the bunch, Jimmy, died of leukemia. While all were left broken-hearted at the tremendous loss, Bill and Lois lived their faith and gave everyone hope in witnessing their unwavering belief in God’s love. The Jimmy Burns Foundation, JBF, was soon formed in Jim’s name shortly after his death and brought friends and family together year after year to celebrate his life and legacy. Over $500,000 was raised with the help of many Loyola alumni including Donny Morrison '87, Billy O’Rourke '88, Steve Maher '88, Artie Collins '60, Andy Engels '88 and Paul Prikos '88, among countless others. Proceeds from the JBF fundraisers were given to the Loyola University Medical Center for cancer research and to families in need of housing during their stays at MD Anderson Cancer Center in Houston, Texas. Thirty-three families in total were helped in loving memory of Loyola's #33, Jimmy Burns.

The importance of family
Bill and Lois's greatest accomplishment, put simply, was their family. They demonstrated great love in their marriage and in the way they treated family, friends and strangers. Giving was never something just checked off the list. They worked tirelessly to make a difference. They remembered Loyola Academy lovingly in their will because they attributed much of the successes realized by their kids to the influences of their high school education. Success to them was never measured by the amount of money in one's pocket, but by the difference one could make in the lives of others: as each man's life touches so many other lives.

Upon hearing of the generous donation earmarked for Loyola Academy, the Burns's kids and their extended families were not surprised, but nonetheless proud to have had such kind and generous parents. Bill and Lois were eternally grateful for the messages imparted by Loyola Academy to their kids and whole- heartedly believed that paying this gift forward would afford countless others to benefit from the lessons learned at Loyola Academy. Bill and Lois would be humbled to know that their generosity had been communicated to the Rambler community. They would likely hope to inspire other indebted Ramblers to follow in their footsteps and give back.
Back