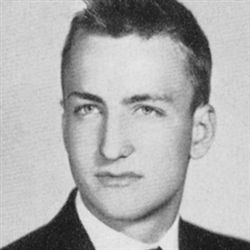 Our Crush the Pool Party on June 27 marked the end of an era—and the beginning of an exciting new chapter at Loyola Academy—as alumni, coaches, pool benefactors, parents and friends celebrated the kickoff demolition of our 1950s-era pool. Guests gathered to watch the south wall of the old pool come down as Loyola Academy President Rev. Patrick E. McGrath, SJ, proclaimed: “Our campus is undergoing a renaissance. Thank you for making this renaissance possible.
Loyola has dedicated the soon-to-be constructed aquatic center to the memory of swimming, diving and water polo team member John D. Norcross ’54 to honor his love for Loyola aquatics and his extraordinary bequest making him the largest benefactor in the history of Loyola Academy.

After graduating from Loyola, John went on to play water polo for Stanford University and attended Northwestern University’s School of Law. He eventually founded a successful Chicago property tax law firm, Crane and Norcross, with fellow Rambler Michael E. Crane ’54. Over the years, John frequently returned to Loyola to celebrate Rambler athletics. Aided by Loyola Principal Gifts officer and alumnus, Les Seitzinger ’88, John became one of the first benefactors to invest in the Aquatic Initiative. After he passed away in November 2014, Loyola received word that this loyol alumnus had engaged in a final act of generosity by leaving a multimillion- dollar estate gift to Loyola Academy in his will.

The new John D. Norcross ’54 Aquatics Center will be housed in a light-filled, two-story natatorium with separate team and physical education locker areas, a coaches’ office, a wet classroom adjacent to the pool area and advanced mechanical systems designed to ensure optimal indoor air quality.
Back