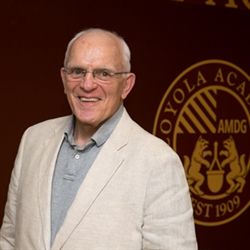 For Dick Devine, Loyola Academy helped guide the course of his life. “My years at Loyola were critical to how my life turned out,” reflected Devine ’61. “Not only did I receive a strong academic foundation that allowed me to succeed in college and law school, but Loyola also helped mold me to be a better person.”
Dick recalls his basketball coach, Gene Sullivan, and Assistant Principal Father Beall as two strong influences during his Rambler years. “When I was in college Gene asked me to help him coach at Loyola, and we remained great friends throughout his life,” Dick said. “Father Beall was the disciplinarian at school, and I got to know him because my behavior wasn’t always perfect! He was strict but fair, and I’ll never forget all that he did for me.”

Dick graduated from Loyola University and earned his law degree at Northwestern University School of Law. He became a prominent attorney in Chicago, arguing in the Illinois Appellate and Supreme Courts and the U.S. Supreme Court. From 1996 to 2008, he served as Cook County States Attorney, running the nation’s second largest prosecutor’s office that included over 900 attorneys.

Dick and his wife Charlene chose Loyola Academy for their own children without hesitation. “Once Matt (Class of 1985), Tim (Class of 1988) and Pete (Class of 1990) enrolled at Loyola, our connection to the school was reinvigorated,” Dick explained. “We went to the boys’ sporting events, and some of their teachers were friends I had grown up with.”

Today, Dick and Charlene’s bonds to the school are still deep. “We have 11 grandchildren, and in the fall, three of them will be Ramblers,” Dick noted. Even though there are fewer Jesuit teachers than in his school days, Loyola’s “philosophy and approach to educating the whole person has endured through the years,” Dick said.

Because Loyola Academy had such an impact on Dick’s life and who he became, he and Charlene decided to make a gift to the school in their estate plans. “We decided to leave a bequest that will create a scholarship for deserving students,” Dick explained. “The scholarship will be named for my late brother, Bill (Class of 1967), and Quinlan, our grandson who passed away.”

Dick added, “We support a variety of worthy charities, but Loyola is special—more like a part of our family. We so appreciate Loyola Academy, and are glad to help preserve it for generations to come.”

The complete article can be found in the Summer 2017 edition of The Loyola Legacy.
Back