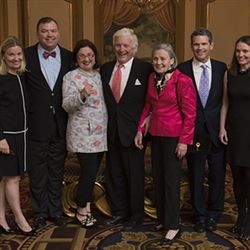 “I think Catholic education is extremely important, starting when children are very young,” Bob explains. “That’s why I contribute predominantly to Catholic educational institutions, including Loyola Academy. “At lunch during my first year at Harvard Law School, I was asked if I thought the professors were terribly ‘elitist,’” Bob shares. “I disagreed. I said I felt right at home, because I went to a Jesuit high school where we were urged to be the best, and if that’s called elitism, then I’m all for it.”

While Bob doesn’t use the phrase “giving back”—“I think that term is a bit cliché”—he credits his father for setting a good example when it came to helping others. “My father was quite charitable. He contributed; it was a habit,” Bob explains. “I guess I learned that practice from him.

“Some time ago my father created the Berner-Hoyt Scholarship at Loyola to promote Catholic education. Shelia and I continue to make contributions to the scholarship because we’ve always thought the Jesuits were terrific educators. I trust Loyola to provide the best education possible for these bright students.”

Loyola Academy is so thankful for the Berners’ generosity. If you would like to learn more about supporting Loyola through scholarship gifts or other giving plans, please contact Tom Cramer, principal gifts officer and director of planned giving, at 847.920.2431 or by email at tcramer@loy.org.

The complete article can be found in the Fall 2016 edition of The Loyola Legacy.
Back