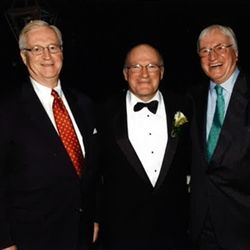 Hogan Heroes: Three generations of the Hogan family give back to Loyola

The arts are alive and thriving at Loyola Academy, thanks to three generations of the Hogan family. More than 25 years ago, the Hogan brothers—Frank ’55, Jim ’56 and Mike ’64—with then president, Father Ray Callahan, created an award that would draw attention to the performing arts at Loyola Academy. Named after their parents, the Frank J. and Monica S. Hogan Performing Arts Award is awarded annually to a student who excels in theatrical performance and demonstrates leadership in the Loyola community.
Frank and Monica worked in the entertainment industry for more than 60 years, dabbling in everything from performing, writing, directing, producing and career management. Frank, a 1928 graduate of Loyola Academy, played in a dance band while attending Loyola University in the 1930s, and Monica (Skelly) got her start singing and dancing at venues nationwide. The couple met and married in 1936.

When the first of their three sons entered Loyola in 1951, the couple renewed their commitment to the school, each serving as president of the Fathers’ and Mothers’ Clubs. Together with Fathers Reinke, English, Reuter and Arimond, they put Loyola at the center of the Catholic school arts community with the Tal-Vue Talent Review, an annual performing arts event that ran for more than 30 years.

Frank, a founder of the President’s Dinner, served as co-chairman of the first and 25th dinners. Monica was recognized in 1965 with the Rev. Daniel A. Lord, S.J. Award for Distinguished Service in the Cause of Youth for her contributions to Loyola. Frank Jr. also played a key role in early fundraising for Loyola. Working under President Fr. John Reinke, S.J. in the late 1960s, Loyola achieved the top ranking in the country for generating voluntary financial support among Catholic Schools and tenth among private secondary schools.

The Hogan family exemplified the values they learned through their experiences at Jesuit schools and were role models for all Loyola students. For this and many other reasons, the Hogan brothers established the Hogan Award in their parents’ names to keep their spirit alive, so that we can proudly proclaim that the arts are alive at Loyola Academy. Taking action to support the arts, Frank, Jim, and Mike have donated nearly $100,000 to this fund that provides support to the performing arts students of Loyola Academy.

The complete article can be found in the Summer 2016 issue of Loyola Legacy.
Back