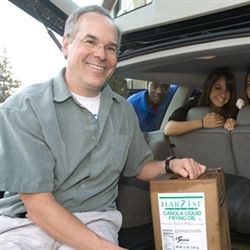 Joe Dahm: A Modern Man for All Season

In the days of yore, Joe Dahm might have been known as a man of letters. He certainly has a few of them after his name, B.A., M.A., R.Y.T. (registered yoga teacher). He is a passionate science teacher, sailing instructor and summer service chaperone at Loyola. Joe is a man for others who has embarked on different pursuits with the noble purpose of giving more than he has received.
Joe was introduced to the Jesuits as an undergraduate at Xavier University in Cincinnati. It wasn’t long before Joe had a conversion experience where he first felt God’s love in his life. Since then, he has tried to follow up that experience by sharing his gifts with others.

In 1980, Joe graduated with his bachelor’s in theology and took a job as one of the first house parents at Boys Hope in Evanston. One of his tasks was to drive the young men from Evanston to Loyola Academy. While doing this, Joe met Loyola faculty and staff and was immediately snatched up to teach theology.

After taking time off to focus on family, Joe realized that what he enjoyed most in life was teaching. So he went back to school and got his master’s degree. Along the way, he was introduced to another love in his life: science.

Joe eventually returned to Loyola as a science teacher. He just completed his 20th year at the Academy. He particularly loves getting students excited about science.

A Family Legacy Lives at Loyola
Joe’s connection to Loyola continued to grow as three of his children graduated from Loyola. His son, Peter, graduated in 2010 and his daughters, Mary and Jane, graduated in 2011 and 2014, respectively.

Not one to rest on his laurels, Joe continues to guide Loyola juniors on their summer service trips around the world. This summer Joe drove a group of students to West Virginia to study the life and history of the area. Joe also spent countless hours working for an orphanage in Toledo City in the Philippines.

Starting a Legacy of Giving
By including Loyola Academy in his estate, Joe has joined the Loyola Academy Dumbach Society. Joe and his wife, Joanne, have set aside $10,000 in their will, also known as a bequest, to benefit our school. “I always wanted to give something to Loyola in terms of my will. Who knows how much I will ultimately give but it’s a starting point. I’m very blessed by my work at Loyola but also because my wife has been successful in her career as well. We both agree that we wanted to give back to Loyola. The school has done so much for me and for our children. So in this small way, I feel I am doing something for the school.”

Joe relates his generous bequest gift to his experience with yoga. “The word yoga stands for union,” he explains. “A yoga practitioner strives for the union of the personal self with the larger self.”

Doing something for the school often means doing something for the world. Joe is currently rallying Loyola Academy Ramblers to join him in supporting a refugee family in the Middle East. He has challenged his students to abstain from buying coffee or soft drinks and directing the savings to a relief agency that will help a family relocate in Chicago.

With Joe, the mission of Loyola Academy is, now and forever, in very good hands!

The complete article can be found in the Fall/Winter 2015 edition of The Loyola Legacy.
Back