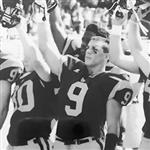 Football: Named CCL Blue Defensive Player of the Year in 2009...named Chicago Sun-Times, Chicago Tribune, and Pioneer Press All-State selection as well as an All-Area and All-Catholic League pick in final season...leading tackler with a 122 and posted 17 tackles for a loss and nine sacks as a senior...recorded 20 hurries, 8 forced fumbles, and 3 fumble recoveries...also forced six fumbles and recovered one for a 63-yard touchdown...recorded 52 tackles and four sacks as a junior, which earned him second-team all-conference honors in the CCL Blue division.

Wrestling: Recorded a career record of 92-32 with 47 Falls...at the time, set the school record for wins in a season with 41 (41-4) and career wins with 92...had 200 takedowns in his career including a team leading 102 his senior year...won the regional tournament at 171 lbs during his senior season and took 3rd in sectionals, qualifying for state...took second in regionals as a junior at 160 lbs and was a two-time sectional qualifier...was a Chicago Catholic League finalist as a junior and placed 3rd as a senior.

At Illinois State: Played in 14 games as a senior with two starts at defensive end...finished the season with 14 tackles, nine of which were solo stops...recorded first career sack in a come-from-behind victory at Western Illinois...had a career-best five tackles in the season-opening win vs. Mississippi Valley State.
Back