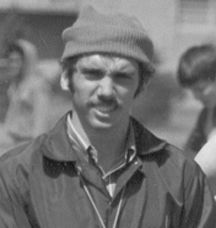 Disciplined, demanding, and devoted to his craft, Arthur F. Morelli earned his stripes developing some of the finest distance runners who ever competed for the Ramblers. To others graced with less talent, he was no less challenging, no less caring, no less a coach. Armed with a commanding knowledge of distance training and strategy, Art preached the gospel of hard work, tactical intelligence, and a systematic training regime. His athletes the contenders and the also-rans toed the line prepared to run to their potential. No greater compliment can be bestowed upon a coach. An All-Catholic League cross country and track career at Loyola led Art to Wabash College. There he lettered all four years in both cross country and track, captaining the cross country team in his senior year. In 1970, Art arrived at Loyola to teach biology and chemistry. He served as the distance coach on Frank Amato's (Hall of Fame, 1990) staff in track and as an assistant to Fr. Bob Beuter (Hall of Fame, 2005) in cross country. Loyola's distance running program felt his impact quickly. He brought a passion and an expertise that helped launch Loyola to unprecedented dominance on the track in the middle distance and distance events. He developed four Hall of Famers Doug Smith (Hall of Fame, 1985), Carey Brunelli (Hall of Fame, 1999), Kevin Barr (Hall of Fame, 2006), and Barry Sullivan (Hall of Fame, 2001) on their way to a flurry of individual and team championships. In 1977, Art left Loyola to join Fr. Beuter's administration at St. Ignatius, serving for four years as assistant principal in charge of all extra-curriculars, including athletics. In addition, he taught A.P. biology while also keeping his hand in coaching as head cross country coach and track distance coach. He closed his coaching career in fine and thrilling style, taking future University of Illinois All-American Mike Patton to a state title in cross country (1980), another state title in the 3200-meter run (1981), and a third-place in the 1600-meter run (1981). Thereafter Art left teaching to begin a career in the pharmaceutical industry. After a twenty-year stint as an executive with Dupont Pharmaceuticals, Art entered the consulting field. He remains a consultant to the industry today, though he is turning increasing attention to entrepreneurship. In 2003, he co-founded Solstice Neurosciences, a San Francisco-based bio-pharmaceutical company.
Back