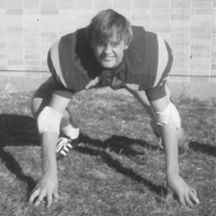 Tall and rangy at 6'3 and 200, Michael A. Murnane wreaked havoc on the best laid plans of opposing offenses. He was very nearly unblockable from his defensive end position, coupling good hands and quick feet with power, mobility, and a fierce intensity. With a quick first step and the best forearm shot in the Catholic League, he put tremendous pressure on the offensive linemen assigned to stop him. He was a disruptive force, striking blockers off balance and reading the play or blitzing the gap and attacking the backfield. His mental toughness and his unmatched passion for the game served him well as a two-way, three-year starter for the Ramblers. Already a fixture as a sophomore defensive end lined up side-by-side with his brother, Hobie (Hall of Fame, 2008), he soon added receiver to his repertoire. For three years he rarely if ever left the field. In his last campaign, Mike was co-captain and leader of the 1975 Hall of Fame team (HOF, 2002) that took a Catholic League title and then stormed through the playoffs to the state semi-finals, Loyola's first Final Four appearance. Mike's contributions to that memorable season were duly noted with his selection to the First Team All-Catholic League and Pioneer Press First Team All-Area teams. In addition to football, Mike was a superb track and field performer in two events not normally seen in combination, the discus and the triple jump. He was the CCL champion in the discus and held the triple jump record at Loyola for many years. Mike took his game and a scholarship to Holy Cross in Worcester, Massachusetts. There he started for four years at linebacker and on special teams. In his senior campaign, he became a two-way player again when he was inserted as a starter at tight-end. The move proved propitious as Mike made an instant impact on offense, leading the team and the Patriot League in receptions and even attracting the interest of NFL scouts. Unfortunately, a knee injury sustained in the game against Brown ended Mike's season, and his college career was effectively over. Mike earned a BA from Holy Cross in 1980, followed by an MBA from Loyola University.
Back