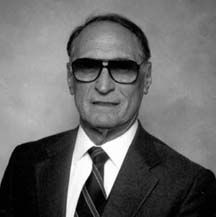 "It will stop hurting when the pain goes away." If injury had any privileges for a Loyola player in the early 70's, then surely one of them was the opportunity of meeting Thomas J. "Doc" Monforti, a man of disarming humor, comforting calmness, and consummate professionalism. During his seven-year tenure at Loyola (1970-76), Tom established a training room that was a benchmark for high schools not only in the Chicago area but in the nation. At a time when most high school trainers were simply coaches who taped ankles, he was a visionary who advanced the field of sports medicine, a voice who quieted the frequency of athletic injuries, and a vanguard who dignified his vocation. Balancing a two-year military stint as a cryptography instructor in the U.S. Army Signal Corps and his undergraduate studies toward a degree in social science, Tom launched a distinguished twenty-three year career at his alma maters, DePaul University and DePaul Academy, first as an assistant (1947-1949) and then the head (1950-1969) athletic trainer. For two years (1956-57) he also toiled as an assistant athletic trainer for the N.F.L. Chicago Cardinals. Subsequent stops as head trainer for the N.B.A.'s fledgling Chicago Zephyrs (1961) and Chicago Packers (1962) cemented his reputation for excellence in sports medicine. When eight years later he landed in Wilmette, Tom brought to Loyola an impressive resume, a progressive influence, and an unmistakable code of honor. In 1976, Tom left Loyola to assume the role of the Chicago Park District's Supervisor of Health and Athletic Training, a position he ennobled through 1993. Tom's professional savvy keyed the publication of several articles and a run of speaking engagements as a featured clinician at, among other venues, the Chicago Board of Education, Holy Cross Hospital, the Chicago Park District, Northwestern University, the Cook County Superintendency, and the Chicago Surgical Society. Tom is already enshrined in the Illinois Basketball Coaches' Association and the Chicago Catholic League Coaches Association Halls of Fame. He is likewise the recipient of the DePaul University President's Special Service Award, the National Athletic Trainer Trainers Association's 25-Year Service Award, and the Illinois Athletic Trainers Association's Special Recognition Award.
Back