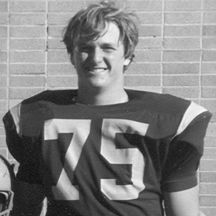 A fierce warrior in the trenches but always a true gentleman outside of them, J. Hobie Murnane personified the Loyola credo, "Men for Others." One could find no better teammate and no better friend than Hobie Murnane. Off the field he was a gentle giant, a man of compassion and good humor and decency. On the field he was a competitor of great discipline and intensity. Intelligent, iron-willed, and relentless, Hobie coupled size, startling quickness, and textbook technique with an unmatched determination to disrupt and to dominate the opponent's line of scrimmage. A three-year, two-way starter at tackle, Hobie brought cohesion and a studied aggressiveness to Loyola's line-play. He was rock-steady in the middle, anchoring both offense and defense with a skill set that was one part athleticism, one part intelligence, and one part commitment to getting the job done. His selflessness, moreover, steeled his pursuit of excellence. As a senior, he was selected to the All-Catholic League team on both offense and defense, a truly rare occurrence. He was also named to the All-Area team and was selected as a Chicago Tribune MVP. Loyola, which had honored him with the McCummiskey Award for sportsmanship in his junior year, honored him again with the prestigious Skoglund Award as the top scholar-athlete on the football team in his senior year. Once football ended, Hobie devoted himself to throwing the shot and discus for the track and field team, and in the spring of 1975claimed the CCL discus title. Hobie received an appointment to the United States Military Academy, where he saw immediate playing time as a freshman. Unfortunately, two knee injuries brought a sudden end to his gridiron career. After earning his bachelor of science degree from West Point, Hobie began graduate studies, earning master's degrees in business administration from Northwestern's Kellogg School, in education from Northwestern, and in theology from the Weston Jesuit School in Cambridge. Hobie returned to Loyola to teach mathematics and to coach varsity football under John Hoerster (Hall of Fame, 2004) and track under Frank Amato (Hall of Fame, 1990). He was named Loyola's Educator of the Year in 1992.
Back