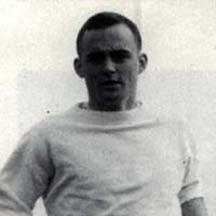 During his career here at Loyola, and later at the United States Air Force Academy, Jim Murphy distinguished himself as one of the finest runners ever produced at either institution. Three-time Chicago Catholic League champion, collegiate All-American, NCAA champion, two-time Olympic trials finalist -- Jim's record speaks for itself. At Loyola, Jim's accomplishments in track and cross country were certainly impressive. As a junior, Jim won the Catholic League Championship in the mile run, adding that to his second place finish in cross country the previous fall. In his senior year, he grabbed the Catholic League title in cross country which had eluded him, and then, in the spring, he repeated as the Catholic League mile champion. His bests in the mile (4:15) and the half (1:55.3) still stand as records thirty-six years later. Jim's outstanding career at Loyola only hinted at the achievement which lay ahead in college. In 1964, he became the first NCAA champion in Air Force history when he won the NCAA 5000 meter championship. He was named All-American in both track and cross country. At the 1964 U.S. Olympic trials, Jim finished 4th in the 5000 meters, narrowly missing a trop to Tokyo. He also was a finalist at the 1968 Olympic trials, this time in the 10,000 meters and finished 6th. He retired from competition with exceptional personal best times of 14:04 in the 5000 and 29:23 in the 10,000. Jim served in the Air Force as an officer and pilot, retiring as a full colonel after twenty-eight years.
Back