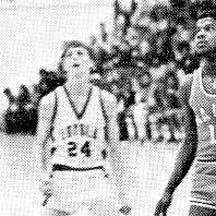 Selfless and smart, guard/captain Daniel W. Monckton Jr. lent a certain dignity to the grunt work indigenous to successful programs. His "substance-over-flash" approach defined his mission and rendered him a favorite among coaches, teammates, even opponents. The third member of his 1973-74 basketball team to enter the Hall of Fame, Dan epitomized its call to hard work, court presence, and discerning leadership. Of course, the returns on those investments netted Dan his fair share of accolades, all of which he accounted as secondary to the greater good. A defensive stalwart, he pooled a subtle quickness, an uncanny sense of anticipation, and a ball-hawking tenacity to shape his team's mindset. On offense, Dan orchestrated Coach Bill Gleason's passing game into an art form. Leading the Ramblers in assists in each of his final two seasons and in shooting in his senior year at a 50% clip (good for 8.6 points per game), Dan cemented berths on both the 1974 All-Catholic and The Pioneer Press All-Area teams. Meanwhile, his 1973-74 cagers (also being inducted tonight), having beaten two nationally-ranked teams, finished 23-and-8, capping the year with four second-place tournament finishes, bowing out in two of those playoffs against long-time nemesis Hales Franciscan. In his final two years, moreover, Dan steadied the 1973 championship baseball run as a second baseman, converting to catcher in his senior year to form with pitcher Charlie Leibrandt (Hall of Fame, 1985) the Chicago Catholic League's most dynamic battery. Accepting a full basketball scholarship, Dan took his game to William and Mary, where he contributed immediately at point guard for the Tribe. Though plagued by nagging ankle injuries throughout his collegiate career, he earned three varsity letters while obtaining his degree in business administration.
Back