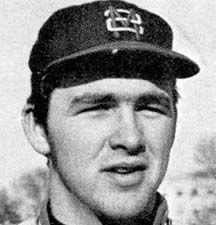 Asked to describe Kevin M. Murtha's swing, former Head Coach John O'Loughlin equated it with that of Hall-of-Famer Billy Williams of the Chicago Cubs. Kevin, then, looms as perhaps Loyola's best pure hitter, a status buoyed by his striking numbers. His hockey and tennis credentials aside, Kevin left his signature on Rambler baseball. A three-year varsity starter at first base, it was with his bat that Kevin most clearly distinguished himself. He banged out a remarkable career average of .386, and in 1968, captured a unanimous vote to the Chicago Catholic League All-Star team. In a particularly memorable moment against St. Rita, he launched a tape-measured homerun, unequalled in Loyola's baseball lore. Thereafter, from 1969-1972, Kevin's bat staked St. Mary's College of Winona to two conference championships and earned him All-Conference recognition. Vigilant of his prowess, the Texas Rangers drafted Kevin and assigned him to their minor-league affiliates.
Back