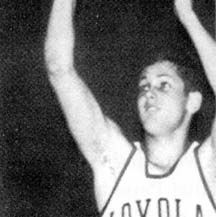 Mark D. Mitchell was one of the most prolific scorers in Loyola Academy's illustrious basketball history. As co-captain in his senior year, Mark had a season that ranks as one of the best of all-time at Loyola Academy. He led the Ramblers to an outstanding 23-6 record, with the team averaging a school record 85 points a game and scoring over 100 points on five separate occasions. Remarkably, all this occurred before the advent of the three-point basket. Individually, Mark was an offensive force. During the 1967-1968 season, he led the Catholic League in scoring with 573 points, an average of 20 points a game. For his career, Mark scored an amazing total of 741 points. For his accomplishments, he received numerous honors after his senior season. He was named to the All-Catholic League first team, as well as to the All-City and All-Area teams. He also earned Special Mention on the All-State team, and was selected to numerous all-tournament teams. After graduation, Mark earned a four-year scholarship to St. Leo College where he continued to excel as a four-year player. His team honored him by selecting him captain of the team in his senior year.
Back