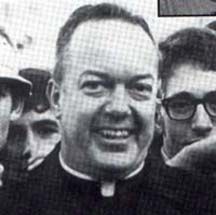 In 1948, twenty-six year-old Jesuit novice Robert G. Humbert walked through the doors of Dumbach Hall to begin a relationship with Loyola Academy that lasted fifty-six years. His long tenure in academics, athletics, and alumni affairs has left an indelible mark on the school and the people it serves. Fr. Humbert attended Cincinnati's Xavier High School, where he was an accomplished athlete. Though he contemplated a professional baseball career, the Jesuits called him instead. He entered the Society of Jesus on August 31, 1940. After earning degrees from Loyola University and Gregorian University, he came to Loyola in 1954 to teach mathematics and coach freshman football and flyweight basketball. He also served as an assistant varsity football coach and bantamweight basketball coach. His 1949 bantam team was undefeated. Fr. Humbert left Loyola in 1950 to study theology and philosophy at West Baden College, where on June 17, 1953, he was ordained a priest. He returned to Loyola in 1955 to serve as acting principal while the new Wilmette campus was under construction. After a stint at Xavier High from 1957 to 1963, he served as Associate Provincial of the Chicago Province. In 1968, Fr. Humbert came back to Loyola, this time to stay. He served for three years as headmaster, noting that one of his most memorable moments was accepting the Catholic League championship trophy on behalf of the undefeated 1969 football team. In 1971, Fr. Humbert began his long and impressive administrative work in alumni affairs and development. In his role as director of alumni affairs, Fr. Humbert routinely traveled around the United States for various alumni gatherings. His Loyola model of national alumni outreach became the touchstone for private school alumni relations. His affable nature and generous spirit served as an example of the Ignatian ideal to Loyola Academy graduates around the country and encouraged them to remain involved with the school. Athletics were never far from Fr. Humbert's heart. Whether as coach or as administrator, his support for Loyola's athletic program remained strong and unswerving for nearly half a century. He was one of the truly great men of Loyola, and he will be missed.
Back