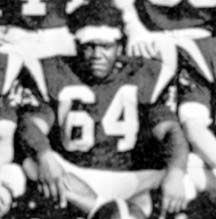 If on some morning a few minutes after six he happened to miss the "L" that stopped near his home on the far south side, it meant he wasn't going to make his first-period class at Loyola. He didn't miss it. Two trains and a bus ride later, Donald A. Holland was seated at his desk in room 107 ready to begin a long day of school and football before the arduous journey home. The first African-American to be inducted into Loyola's Athletic Hall of Fame, he wrote a story of sacrifice and commitment, of talent and desire, of athletic success achieved in the face of tremendous obstacle.
Back