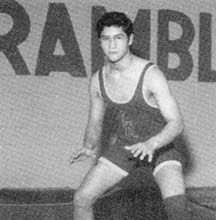 After an impressive four-year career punctuated by a magnificent final season, heavyweight Jose L. "Pepe" Lopez takes his proper place with other greats in the annals of Loyola wrestling. Pepe achieved great success in both wrestling and football. Even though he was a one-man wrecking machine on the football field, it was on the wrestling mat that Pepe truly left his mark. As a sophomore, he finished fourth in the Catholic League and an impressive second at Districts. Junior year found Pepe repeating these same feats, as well as earning MVP honors for Loyola. During the following summer, Pepe entered the inaugural Prairie State Games and came away with a gold medal. It was his senior year, however, that propelled Pepe into the upper echelon of Loyola Academy wrestling history. Loyola's co-captain dominated the competition, compiling an impressive record of 34 wins against only 4 losses. He was a second-place finisher at the Catholic League championship, he was the IHSA District champion, and he earned his first ever trip downstate by winning the IHSA Sectional championship. Once downstate, he continued his success by finishing seventh, missing out on a medal by criteria. At season's end, he was once again named team MVP. Pepe left Loyola with a remarkable career mark of 102 wins and only 25 losses. Over 80 of his wins were by pins, and he never lost a match in Loyola's gym. As a middle linebacker for the football team, Pepe was feared by opposing teams for his ferocious tackling. After his senior year, he was named to the Catholic League All-Star team. He continued his football career at Indiana University, where he was a walk-on for the team.
Back