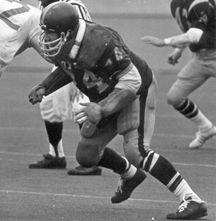 A three-year starter on both sides of the ball, iron-man Michael P. McKiernan provided a stalwart presence to the gridiron fortunes of some of the finest teams to wear the maroon and gold. Quick, smart, strong, and unrelenting, Mike warred at the line of scrimmage with gritty determination from his tackle position. Of good size yet often dwarfed by Catholic League behemoths, he won his share of battles with a blend of textbook technique and a blue-collar work ethic that is the prerequisite for superior line-play. On offense, he was a running back's best friend, not at all shy about pancaking his defensive foes. On defense, he was a disruptive force, performing the unheralded grunt work that great teams depend upon. On both sides of the ball, he possessed the intangible quality that every great lineman had confidence in the knowledge that he will never quit. Mike was a leader and an exemplar on the field, and his intensity was admired by coaches and teammates alike. He was a force on three distinctive teams in Loyola storied past, teams that controlled the line of scrimmage with speed, intelligence, and sheer willpower despite tremendous differences in bulk. By the end of his senior season, Mike's superior play and inspired approach to the game helped solidify his claim to All-Catholic League, All-Area, and finally, All-State recognition. Mike's work in the trenches drew the interest of college coaches, and he accepted a scholarship to Northwestern University. There he played guard and tackle, lettering in both his sophomore and senior campaigns. After earning his bachelor's degree in speech from Northwestern, he began an eleven-year stint in the world of advertising before joining Grubb and Ellis in 1988 as a commercial real estate broker.
Back