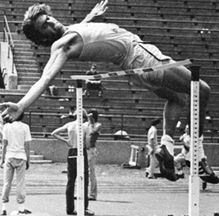 In a track and field discipline requiring speed, explosive power, exquisite timing, and delicate body control, only a few possess the physical gifts necessary to meet its demands. Elite high jumpers, faced with the challenge to leap over a bar several inches above their heads, are rare performers indeed. Between 1976 and 1978, Edward E. Lehman proved one of the few and the rare as he rewrote the Loyola record book in the high jump with a long string of glittering performances. Lean and lanky, Ed looked the part. A three-sport athlete in football, basketball, and track, Ed possessed a natural athleticism that served him well as a multi-event performer on the track and in the field. He worked the sprints, the mile relay, and the long jump, but it was the high jump that became the special province in which he established a record of consistent accomplishment unrivalled by any jumper in Loyola Academy track and field history. In the esoteric world of high jumping, clearing a height of six feet is considered a benchmark that separates the pretenders from the contenders. Reaching it once in a high school career is a notable accomplishment. With each increment above that threshold, the list of achievers grows ever smaller. As a high jumper of remarkable consistency, Ed leapt over the six-foot barrier an amazing twenty-two times in his career. He cleared 6'4" four times, topped only by his indoor record of 6'5", a mark that still stands today. Ed left Loyola the owner of ten of its top thirteen high jump performances ever, including what were then the top five all-time Loyola jumps. His most dramatic moment came in the 1978 Catholic League Indoor Championship meet at the University of Chicago. With the title on the line between Loyola and Brother Rice, and with the high jump the lone event remaining, Ed decided the meet with a victorious 6'3" leap to nail down the title for Loyola and to secure Loyola Academy's 100th CCL championship in all sports. In three years of varsity competition, Ed finished in the top three of the CCL high jump six straight times in three years, indoors and outdoors, and twice qualified for the state finals. Upon graduation from Loyola, Ed headed to DePauw University, where he lettered four years on the Tigers' track team, competing in the high jump, long jump, 400-meters, and the 1600-meter relay. After earning his bachelor of science degree from DePauw in 1982, he attended law school at the University of Notre Dame and then Loyola University, earning his degree from Loyola in 1985. Not long after the reestablishment of diplomatic relations between the United States and China, Ed journeyed to Beijing, where he served as a corporate attorney with an American firm. On June 4, 1989, amid the chaos and uncertainty of Tianamen Square, Ed's life suddenly changed. When ordered by his firm to leave the country for Hong Kong because the firm could no longer guarantee his safety, Ed refused to leave the mainland, the only foreign attorney who chose to remain behind. Dismissed by his firm for insurance reasons, Ed continued practicing law for a Chinese state-run firm. With the reintroduction of private law firms to the country in 1992, Ed and his partners founded Lehman, Lee, & Xu, the eighth private law firm to be founded in The People's Republic of China and the first Chinese law firm ever to be managed by a foreign national.
Back