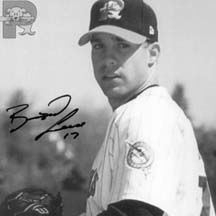 Owner of a nasty slider, a 90-plus-mph fastball, and a mesmerizing change-up, right-handed pitching standout Brandon G. Leese finished his mound career as one of the handful of great hurlers in Loyola baseball history. Long on talent, Brandon posted an impressive array of statistics, the most telling a miniscule 1.64 e.r.a. over his junior and senior years. During that same stretch, Brandon posted a 13-7 record sandwiched around 168 strikeouts (against 52 walks) in just 128 innings. Indeed, his strikeout-to-walk ratio (exceeding 3-to-1) underscored a three-pitch mastery, pinpoint control, and a closer's mentality. For his efforts, Brandon captured All-League honors, and his team a Chicago Catholic League championship. Grounded in a strong work ethic and an unflinching determination, Brandon was as easy to teach as he was eager to learn intangibles that landed him a scholarship to Butler University. In just three years in Indianapolis, he left his considerable mark, logging 221 innings, a 22-10 record, and 215 strikeouts, in the process compiling 13 complete games over 36 starts. In the last of those three campaigns (1996), he notched a 9-3 record, bagged 79 strikeouts (then a Butler single-season record), and fashioned a 3.48 e.r.a. Even with a year of eligibility left, Brandon topped out as then the Bulldogs' all-time wins and strikeouts leader. Brandon left Butler after his junior year upon being drafted in the seventh round by the San Francisco Giants. Subsequently traded to the Florida Marlins in 1997, Brandon emerged as his Rookie League's Pitcher of the Year. In 2000, he drew AA All-Star recognition, just short of his 2001 promotion to the Marlins' AAA affiliate in Calgary. The latter half of that season, Brandon played major league baseball in South Korea.
Back