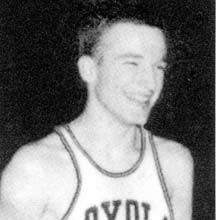 With brothers Frank ('55) and Jim ('56) pointing the way, Michael J. Hogan exploded onto the basketball scene in his senior year. As the point guard for easily the most overachieving team in Loyola's rich sports history, Mike inspired a phenomenal late-season run. With solid, all-around ability at both ends of the court coupled with unselfish team play, Mike led the 1963-64 squad which, after backing into the playoffs (3rd place, North Section), stormed to the Catholic League Championship. The highlight along the way was the semi-final game against highly-favored Mt. Carmel. Down seven points with less than two minutes to play, Hogan and his fellow Ramblers parlayed a feverish full-court press and marksman shooting into a stunning victory. In the City championship game at Chicago Stadium against powerful Public League champion Crane Tech, Mike played brilliant ball, pumping in 29 points only to see his team fall just short of engineering another major upset. For his heroic efforts, Mike received the game's MVP award, presented by then Mayor Richard J. Daley. Other honors followed, with selections to the All-Catholic League, All-City, and All-State teams. After graduation, Mike played four years at Loyola University and was a contributor to the 1966 team that went 22-3 to finish 3rd in the country. For his excellence both on the court and in the classroom, Mike was honored as the recipient of the Student-Athlete Achievement Award.
Back