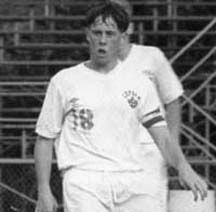 John was a 3 year starter on the Loyola soccer team. He had a career 39 goals and 38 assists. He led the team to 2 Regional titles. John was named a Chicago Catholic League All-Star for 2 years, All-Sectional as a junior, and All-State as a senior by the IHSA. He was team captain and Most Valuable Player his senior year. John was also a 2 year member of the Loyola football squad during the soccer season. He was named as a member of the Pioneer Press All-Area team and a member of the Chicago Catholic League All-Conference team. He assisted the 1992 IHSA State Runner-up team with 41 points after touchdowns and 5 field goals.
Back