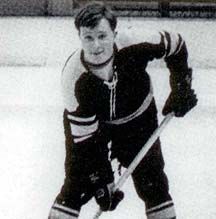 When a student enters the doors of Loyola Academy, he or she hopes to somehow leave a mark. For Brian P. McIntyre, his work was forever frozen in the ice. Brian's sporting passion was hockey, and he brought that passion to Loyola. There existed one slight problem for those like Brian, and there were many, who wanted to play Loyola hockey: the Academy did not have a team. With persistence fueled by this passion, Brian, along with Mike Leonard '65, relentlessly badgered then Athletic Director Gene Sullivan into finally giving the go-ahead in 1965, and Loyola Academy hockey was off the ground and onto the ice. Brian played on that first team in 1965-1966, while also serving as a writer for the Prep and the Yearbook. His interest in hockey, however, was not over. After graduation from Loyola University in 1972, Brian worked by day writing for an ad agency and by night creating and writing THE Program, an unofficial Blackhawks newsletter sold outside Chicago Stadium. The success of that venture led him to start a similar newsletter covering the Bulls. His work caught the eye of the Bull's front office, which hired him as director of public relations and marketing. In 1981, he joined the NBA as director of public relations. In the 33 years since Loyola hockey's inception, the Rambler icemen have produced two State championships and League titles. When asked to submit nominations from Loyola's fine hockey tradition to the Athletic Hall, original coach Dan Corns listed several hockey greats, but then suggested that the first to go in should be the one who started the puck skidding: Brian McIntyre.
Back