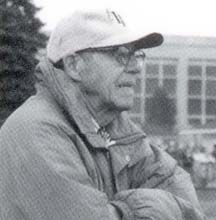 Loyola's football faithful have perhaps taken little notice of a solitary, inconspicuous figure who has kept observant watch on the home sideline for over 40 years. Yet his quiet contribution to Loyola's football and overall athletic program must not go unrecognized. In 1960, Dr. Joseph F. Hinkamp, a young doctor in his mid-30's with a new surgical practice, was approached by Loyola president Fr. Michael I. English, S.J. Fr. English, seeking to raise Loyola football from the basement of the Catholic League, had already hired a new coach, Len Jardine (Hall of Fame 1985) and was now looking for one more piece of the puzzle - a team physician. He asked Joe Hinkamp, a product of Jesuit education, if he would be willing to help out on game days. The rest is history. Loyola football became a powerhouse, and Joe Hinkamp has been there every step of the way. Dr. Hinkamp's contributions to sports medicine at Loyola should not be understated. He played a large part in Loyola's evolution from an antiquated system in which, without access to a physician or trainer, the coach would make all decisions regarding an athlete's fitness to play, to the modern system in which physician, trainer, and coach work together as a team in dealing with athletes and their injuries. Joe established this team approach right from the beginning. He was one of those instrumental in the hiring of Loyola's first professional trainer, Tom Monforti. He articulated the need not just for competent in-house staff but for adequate training and rehabilitation facilities as well. Perhaps Dr. Hinkamp's greatest contribution was his preaching the gospel of "preventive fitness," the importance of teaching young people the necessity of good health and year-round conditioning as a "prevent defense" against injury and illness. Joe graduated from St. Ignatius H.S. and then attended Villanova University for officer training during World War II. He received his medical degree from St. Louis University School of Medicine in 1950, and served as a U.S. Air Force medical officer from 1950-1953 before entering surgical training at Cook County Hospital. Thereafter Joe established a practice in general surgery of great repute, primarily in affiliation with St. Francis Hospital in Evanston.
Back