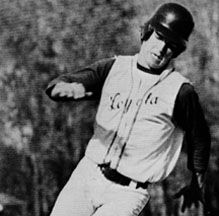 The prototypical lead-off man and a consummate middle-infielder, Christopher Q. Kendall proved the kind of player a coach could build a team around. His was a game of fundamental soundness and s
implicity, grounded in an ability to execute the basics of baseball with flawless and consistent brilliance. Armed with tremendous quickness in hands and feet, boundless energy, and a mature understanding of and commitment to the team game, Chris was a masterful ballplayer, one of the handful of truly exceptional diamond men from Loyola baseball's renaissance of the early 1970's. Indispensable with both bat and glove, Chris catalyzed the offense and anchored the defense. At the plate, he was the ideal lead-off man: a dependable contact hitter who coupled patience with tremendous speed and hustle on the base paths. In the field, he commanded the defense with flawless glove work, tremendous range, and a well rehearsed ability to turn the double-play. Perhaps his greatest attribute was the attitude he brought to the ballpark each day: a genuine and enthusiastic love of the game and of the team. A three-year starter at second base, Chris in his last two campaigns stood at or near the top in nearly every important statistical category. As lead-off man, he led Loyola in games played and at bats for two straight years, twice finished second in hits, led the team in walks, and watched his batting average soar to a heady .339 in his final season. Defensively, he ended his career with a remarkable .928 fielding average. He committed a mere eleven total errors over the course of thirty-nine games and two seasons, at one point stringing together ten games in succession without a miscue. Captain of the 1975 team and its Most Valuable Player, Chris was twice honored with selection to the All-Catholic team, adding an All-Area selection in his senior year to close out his Loyola career. Chris took his bat and glove to St. Mary's University in Winona, Minnesota, where he flourished, earning four major letters while amassing a .375 lifetime batting average (.408 as a senior) and a school record for doubles (22). A senior team captain and Most Valuable Player honoree, he was a two-time All-Conference selection (1978, 1979), collecting All-Region honors in his final campaign as well. After earning a degree in language arts in 1979, Chris later returned to St. Mary's to coach baseball (1985-1990) and to pursue a master's degree in human development, which he was awarded in 1994.
Back