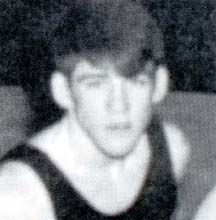 Joseph P. Hayes surely ranks among the handful of the finest wrestlers in Loyola mat history. His Loyola career was simply superb. Wrestling in the 138 pound class, Joe possessed a quiet intensity and gritty determination. He followed a letter-winning sophomore season with an impressive junior campaign in which he garnered the first of his successive Chicago Catholic League crowns. In the process he helped bring the great 1970 team (Hall of Fame, 1999) to within six points of an elusive first league title. Joe climaxed his Loyola career with a senior season that was nothing short of dominating. The co-captain grappled to an undefeated season of 18 wins against only a single tie. He capped off the season with his second Catholic League championship and was then honored as the Chicago Catholic League Most Valuable Wrestler of 1971. Joe's record of accomplishment continued at St. John's University in Minnesota. There he claimed the Minnesota Intercollegiate Athletic Conference titles in both 1972 and 1973. Only a referee's decision in overtime of the finals kept him from a third successive title in 1974. He placed second in the 1973 National Catholic Championships and led St. John's to a third place in 1972 and a fifth place in 1973 at the NAIA Championships. Joe ended his career with his selection as the team's Most Valuable Wrestler in 1974. After college, Joe began a career as a firefighter and paramedic for the Evanston Fire Department. In 1986 he was honored by the city with the Craig Styles Award "in recognition of excellence above and beyond the call of duty" for his action at a house fire in July of 1985. He also gave something back to his sport. In 1977, Joe and a former Loyola teammate, Bill Hofher, initiated, founded, and coached a wrestling program at St. Margaret Mary's which sent future Hall of Famer Pepe Lopez, among others, to successful careers.
Back