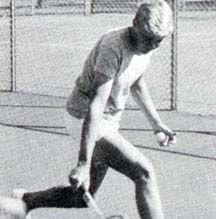 Michael J. Kemper was the dominant player in the Chicago Catholic League in the late 1960s, leading Loyola through four straight undefeated seasons. Mike played varsity tennis all four years at Loyola. As a freshman, Mike played number five singles and then in his sophomore year moved up to number two. In his junior and senior seasons, Mike dominated at number one singles, twice claiming the Catholic League singles' title. He was undefeated in league play as a junior, and was undefeated in both league and non-league play during his senior campaign. He was given the prestigious Lawless Award as the outstanding athlete in tennis for 1969. He captained the team in both his junior and senior years. Mike's individual success on the court paralleled the tennis team's remarkable run during the 1960s. While at Loyola, Mike helped his team to four undefeated seasons in league play and four straight League championships extending Loyola's undefeated string to 83 and an unprecedented six straight League championships. Mike also excelled on another court at Loyola - the basketball court. He played on the varsity team both as a junior and as a senior. He was the starting forward on the basketball team his senior year, and he led the team in shooting percentage that year. Mike continued his tennis career at Brown University, where he continued to excel. He competed on the varsity team from his freshman year through his junior year. He was elected team captain as a junior. Unfortunately, Mike was injured for his senior year and was unable to compete. After graduation from Brown, Mike earned an M.B.A. at the University of Chicago before entering the world of professional tennis.
Back