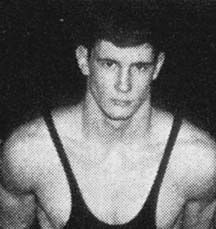 Possessing a lethal combination of strength and speed that earned him the nickname "Spiderman," James R. Hansen wrestled through two dominant seasons at Loyola before embarking on an even more impressive career at the University of Notre Dame. Six years of competition revealed one of the finest wrestlers ever to come through Loyola's program. Amazingly, Jim did not start wrestling until his junior year at Loyola; however, he quickly made an impact as he supplanted the team captain before the season began. Jim soon established a reputation for using risky moves that paid off in pins as well as an uncanny ability to rescue himself from any predicament. He ended his first competitive season as Catholic League Runner-up, and entered his senior campaign with great expectations and an intense desire to win. He did not disappoint. Wrestling at 138 pounds, he went undefeated en route to the Catholic League crown, and co-captained the Ramblers to second place in the league. Because private schools were not yet admitted into the IHSA, Jim was denied the opportunity to test himself against the best in the state. He did, however, defeat the Wisconsin state champion in a dual meet, easily pinning him 46 seconds into the first period. Upon graduation from Loyola, Jim took his mat game to Notre Dame, where his maturation as a grappler deepened. He earned monogram letters three straight years for the Fighting Irish, twice as co-captain. The final record was nothing short of brilliant: 37 wins (14 pins) against only 6 losses, five tournament MVP selections, and a National Catholic Championship in 1970. Recognition of his superb performance came with his selection as team MVP after both his junior and senior seasons. Jim earned a B.A. in English from Notre Dame and an M.B.A in Finance from Loyola University.
Back