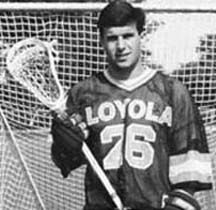 At Loyola: Three-year starter for the Ramblers and the co-captain for the 1990 and 1991 state championship teams… led the state in scoring with 50 goals and 30 assists, earning First Team All-State honors during his junior season…led the team in scoring again senior year with 33 goals and 33 assists... earned First Team All-State honors during senior year while also being named an All-American…selected to play in the North/South game at Johns Hopkins Homewood Field.

At Denison University: Four-year starter at Attack…led the team in scoring for three consecutive years…earned First-Team All-Conference honors in each season….served as team captain and went on to earn All-American honors… selected to play in the North/ South game at Johns Hopkins Homewood Field.
Back