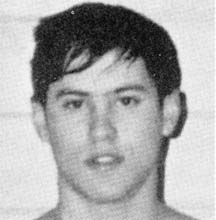 Leaving in his wake a string of records, Christopher A. Hansen was one of the most competitive, versatile, and accomplished swimmers in the history of Loyola Academy swimming. As a four-year swimmer at Loyola Academy, Chris distinguished himself with remarkable record-breaking performances. He set freshman records in the 50 yard and 100 yard freestyle, backstroke, and butterfly. He also set JV records in the backstroke, butterfly, 200 freestyle, and 200 individual medley. As a varsity swimmer, Chris set the Catholic League records in the 100 backstroke, 100 butterfly, and 200 individual medley. His time in the backstroke was an unofficial state record. Chris took the League championship in both the 100 backstroke and 200 individual medley, and his superb senior season brought him the Lawless Award as the outstanding swimmer in the Catholic League. At the 1970 National Catholic championship, Chris set a national Catholic record in winning the 100 yard backstroke. He was named to the high school All-American team in both the backstroke and the butterfly, and swam with the U.S. National team in its com-petition with Canada. Chris' individual achievements his senior year led the Ramblers to one of their most successful team seasons. This outstanding team closed the season with a third place in the Villanova Nationals and an extremely close second place in the Chicago Catholic League. After high school, Chris' success continued at the University of Michigan. He was named to the All-American team in each of his four seasons, and he captained his team in his senior year.
Back