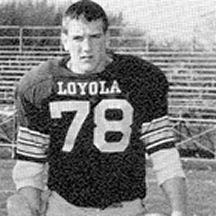 Pressed for his recollections of his former player, Coach Frank Amato did not hesitate to reply with a simple and emphatic declaration: "He was the toughest lineman I ever coached. Ever." A hard-nosed, physical, two-way tackle manning the front lines on two of Loyola's storied teams of the mid-60s, unheralded Mark D. Matthews was the quiet linchpin to a team of much-publicized stars. At 6 feet, 178 pounds, Mark, like so many on those legendary Rambler squads, was often no match in height and weight to the much bigger men across the line of scrimmage. Lacking dominant size, he countered with superior speed, explosive strength, and above all, sheer aggression. His ready desire to hit people helped him find a home in the interior line and its play-by-play invitation to physical contact. These qualities, coupled with his technical mastery on each side of the ball, served to sway the advantage back to him in match-up after match-up. Mark anchored Loyola's game in the trenches from his tackle position, wreaking havoc on the opposition with tremendous quickness off the ball and a ruthless, hard-hitting approach to the game. For the unfortunate one whose job it was to match up with him on the other side of the ball, he was a force to be reckoned with. One of five Ramblers to start both ways, he was instrumental in leading two Hall of Fame teams to a combined record of 18-2-2 and successive Prep Bowl titles in 1965 and 1966. A special teams' starter as well, he seldom if ever left the field. An All-Catholic League (Honorable Mention) and Coca-Cola All-Star team selection in his senior year, Mark left a more lasting impression on his teammates and coaches, who recognize him as one of the dependable and unsung heroes of those glory days. After graduation from Loyola, Mark attended John Carroll University, where he was named its Rookie of the Year after his freshman football season. Thereafter, he ended his football career, completing his undergraduate work at Marquette University with a bachelor's degree in English.
Back