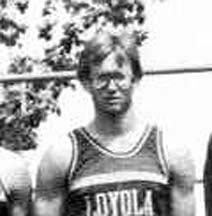 An elite sprinter and jumper, and the leader of the record setting "Gold Dust" relay team, Joseph R. Kane Jr. brought more than prodigious talent to the track. Though his career best marks 10.7 in the 100-meter dash, 22.5 in the 200-meter dash, 44'1.5" in the triple jump, and 20'4.5 in the long jump clearly place him among the top rank of Loyola track men, they do not adequately define him as a sportsman. Of equal importance were those intangibles that do not translate into times and distances an infectious passion for the sport, a genuine love of team, a commitment to communal endeavor. An impact performer even as a freshman, Joe thus began a career of sustained excellence. By sophomore year, he was anchorman on the sprint relays and qualified for the state meet for the first time with a whopping 42' triple jump and a second place at districts. As a junior, he joined teammates Carter Covington, Sandy Thompson, and Jay Schwarze to form the "Gold Dust" relay team, an unofficial designation for a group that in the 400-meter relay set a new Loyola record (43.2) and later claimed the district title. In his final season, the senior captain launched an MVP season with school indoor records in the triple jump (44'1.5") and the 300-yard dash (33.3). He followed with a brilliant outdoor campaign. Forced by injuries to stop heavy competition in the long and triple jumps, Joe concentrated on the sprints and relays. He and his "Gold Dust" brothers claimed school records in both sprint relays -- the 400-meter in 43.3 and the 800-meter in 1:29.3 -- while piling up meet titles. His performance at the IHSA district meet spoke volumes: he captured the individual title in the 200-meter dash in 22.5, and led both relays to titles with a 10.8 split in the 400- meter relay and a 22.3 split in the 800-meter relay. Joe was recruited to run track at Cornell University, but six months into his training became disillusioned, missing the sense of team and of cooperative striving. He switched to football his sophomore year (Joe had twice lettered in football at Loyola), earning a spot on the varsity by his junior season. A shoulder injury led to surgery, and a re-injury in the second game of his senior year ended his athletic career. Joe earned a degree in electrical engineering from Cornell in 1986.
Back