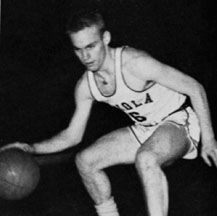 It did not take long for rookie coach Gene Sullivan to make the first critical decision of his Loyola tenure. A few minutes of scrimmaging made everything clear. He put the ball and the fate of his 1958 Ramblers in the hands of a 5'10 floor general who so clearly was a master of all aspects of the game. A brilliant ball-handler, deft passer, gifted jump shooter, and tenacious defender, Robert K. Jansen proved the definitive point guard. In the age of crew cuts, satin uniforms, and canvas sneakers, he was the personification of the hustling playmaker and ball-hawking defender, a player who overcame a lack of size with quickness, a devotion to fundamentals, court savvy, and a stubborn scrappiness. Bob possessed a unique ability to dribble a basketball, routinely threading his way through full court pressure to set up teammates or to score himself with his patented jump shot. Moreover, he brought a studied intensity to his defensive duty, promoting the notion that good basketball teams play at both ends of the court. After a freshman year of varsity lightweight basketball and a sophomore season cut short by injury, Bob exploded onto the Chicagoland prep scene in his junior year, earning selections to the All-Catholic (First Team), All-City (Special Mention), and All-Northern Illinois (Outstanding Commendation) post-season teams. Clearly he had arrived. By his senior year, he was the go-to player on a very fine team and, in that final campaign, sealed his growing reputation as he poured in seventeen points per game while garnering All-City (First Team) honors and repeat selections to the All-Catholic (First Team) and All-Northern (Outstanding Commendation) teams. Twice he was named Chicago Prep Player of the Week in recognition of his dazzling all-court artistry. Most importantly, he represented his team and Loyola Academy with integrity and class, as was evident at the 1957 DePaul Academy Christmas Tournament, where he was presented the prestigious Mayor Richard J. Daley trophy for sportsmanship. Bob went on to play four years of varsity basketball at St. Mary's College in Winona, Minnesota, where he earned his degree in business administration. After a long corporate career with Avon Products, Bob founded his own management consulting form, RKJ Associates.
Back