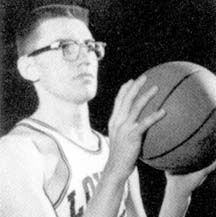 Loyola's storied basketball program of the 1960's begins with lean, angular John F. Gorman. The 6-7 center on Coach Gene Sullivan's "most talented team" pooled a deadly hook shot with an impenetrable inner defense to emerge the dominant player on the Ramblers' 21-3 team of 1962. In his junior and senior seasons, in which his teams compiled a 39-9 record, John led the Heavyweights in double-doubles (scoring and rebounding). His presence alone factored into two DePaul University Holiday Tournament championships (1961 and 1962, the second a product of his 34 point outburst in the title game against Leo); the 1962 North Section crown; and fourth place in the city finals against Marshall. Perhaps the most telling aspect of his game, however, was John's positioning and timing-- intangibles that defined his rebounding and shot-blocking prowess. He was recognized for his superb play during the 1962 season with selection to the All-Catholic League (2nd time), All-City, and All-State teams. After graduation, John took his game to Xavier University, where he starred for two seasons as starting center in Division I play. Following stints with the American Peace Corps Volunteers in India and the City News Bureau, John launched a stellar career (1974 - 2000) as reporter / editor of the Chicago Tribune. His professional honors include the Pulitzer Runner-Up for his fourteen -part series Growing Old in America (1978), the AP First Place Spot News Award for his coverage on the Cline Bridge Collapse (1979), and the Peter Lisagore Award for business reporting (1987).
Back