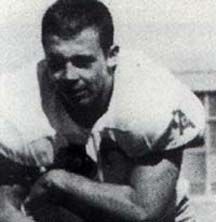 Jeff Markey was the first in a line of great running backs during Loyola's football resurgence in the sixties. Before Marks, Spellman and Pooler, there was Markey. After an outstanding junior season, Jeff stepped up to a new level as senior. He led the '62 football team in rushing with a six yard average and was the top scorer in the Catholic League with twelve touchdowns for seventy-two points. This helped the Ramblers to their first undefeated regular season in fifteen years. Only a one point loss to St. Rita denied them the Catholic League Championship. These accomplishments in 1962, Jeff's third year on the varsity, led to his selection to the Catholic, All-City and All-State honors. Jeff also played basketball all four years and was a valuable contributor to the outstanding light weight teams of 1962 and 1963. After graduation, Jeff won an appointment to the Air Force Academy earning a B.S. degree in Civil Engineering and later an M.A. in Structural Engineering from the University of Illinois. Jeff spent his Air Force career working on design, construction and maintenance of air bases. He retired with the rank of colonel.
Back