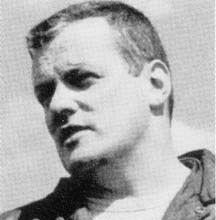 Emerging in 1963 from Milwaukee's Dominican High School to assume Loyola's football fortunes, a position he championed over a five-year tenure, Robert P. Naughton epitomized everything right with coaching: integrity, verity, and gentility. Just two years after his hiring as head coach, Bob guided Loyola teams to consecutive Prep Bowl championships in 1965 and 1966 (the first of those squads will tonight accompany Bob into the Hall of Fame). The Chicago Sports Writers Association capped the Ramblers' 10-1 season of 1965 by naming Bob its Prep Coach of the Year. Bolstered by this run of success, Bob compiled a resounding 30-3-3 record over just a three-year period. After a brief stint at Brown University, Bob returned to the North Shore and New Trier West High School where he served thirteen years as the Trevians' (nee Cowboys') head coach, claiming two Central Suburban League championships and the 1970 Notre Dame Club of Chicago's Coach of the Year Award. A stellar math teacher, Bob eventually stepped down from both the classroom and the gridiron to become New Trier's Athletic Director from 1981 to 2000. As testament to his administration, New Trier has amassed thirty-one state championships under his direction.
Back