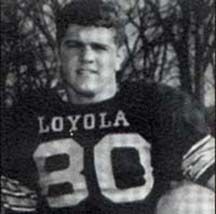 A three-year varsity letterman, Tom Nieman established himself as one of the greatest ends ever to play for the Academy. One cannot talk about Loyola's great teams of 1965 and 1966 without including the name Tom Nieman in the conversation. He was a vital contributor to Loyola's Catholic League and Prep Bowl titles those years. A fine athlete who could play almost any position, Tom was respected for his tough, aggressive play on both sides of the ball and his keen understanding of the game. On the offensive side, he was a truly exceptional downfield blocker who, in the Prep Bowl, single-handedly took CVS's top safety out of his normal game with his devastating blocking. On the defensive side, teams would often run away from his side out of respect for his play at defensive end. At the end of his senior year and another City Championship, Tom was the recipient of the team's Outstanding Defensive Player award. He was selected to the Chicago Tribune's All-Chicago team and the New World's All-American team. He attended the University of Michigan on a football scholarship and in his junior year played on the Wolverine Big Ten co-champs and Rose Bowl teams. He lettered in his senior season, and his special contribution to the team was recognized when he was selected by the coaches for the prestigious "Champion of the Year" award.
Back