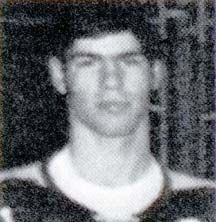 A dominating player during the early days of Illinois high school hockey, Thomas E. Machowski distinguished himself as the pre-eminent Loyola player of his era and certainly one of the finest ever to lace up the skates for the Academy. Big and strong, a deft stick-handler and a smooth, powerful skater, Tom was a controlling force for whom opponents had to account. He had the rare ability to play the game end to end. An excellent defenseman who yet could outskate nearly everyone else on the ice, he could single-handedly carry the puck from the defensive end into the offensive attack. He possessed a strong shot but was equally adept at setting teammates up. A three-year varsity starter who led through his play, Tom was named alternate captain in both his sophomore and junior seasons before assuming the captaincy his senior year. He led the Ramblers in scoring in 1970 and did so again in 1971 when he was the leading scorer in the Catholic League as well. Tom was named to three straight All-League teams, and he capped his high school career with his selection as the Most Valuable Player in the Catholic League. After graduation, Tom took his game to collegiate powerhouse the University of Wisconsin (Madison), becoming the first Rambler hockey player to receive a full athletic scholarship to a Division I school. There he started as a sophomore defenseman and wing on the 1973 Big Ten and National Championship team. He was drafted by the Atlanta (now Calgary) Flames, a significant honor for an American player at the time. In 1976, Tom was invited to play for three months with the U.S. National pre-Olympic team as it toured the country in preparation for the Innsbruck games.
Back