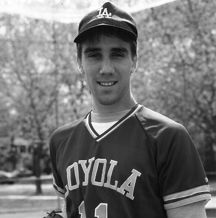 As a fifteen year-old freshman at Loyola, young pitcher David R. Geeve had already reached a crossroads. Cut unceremoniously from the frosh baseball team, he considered giving up the game he had loved from the day he could swing a bat or hold a ball in his glove. However, he realized he wasn't ready to give up the game. Instead, he went back to work. His is a story of a dream and the persistence to keep following it, a story of a kid who didn't make the team and responded by sticking with it, parlaying early disappointment into a distinguished prep, collegiate, and professional baseball career. A versatile athlete on the field who excelled at multiple positions, Dave enjoyed a superb career at Loyola, first as a reliable, sure-handed junior shortstop wielding a .313 batting average, then as an All-Catholic League, All-Area control pitcher (5-2) and shortstop carrying a gaudy .333 batting average in his senior year. With his development as a pitcher still in its early stages, he escaped the notice of college coaches. He was told that he did not have a future in big-time baseball. Dave set out to prove the doubters wrong, armed only with Loyola's Most Valuable Player award, an emerging but as yet unfinished repertoire of major league pitches, and an abiding belief in himself. Undaunted by a lack of interest from the D1 schools, Dave walked on at Oakton Community College, where his success on the mound did not escape the notice of the professional scouts for long. Drafted by the Chicago White Sox after his sophomore season at Oakton, Dave instead accepted a scholarship to Bradley University. At Bradley, a growing mastery of the pitching craft, a glittering strikeout-to-walk ratio, and a deadly curveball brought Dave the Bradley University Pitching Award in 1991 and, subsequently, the notice of big-league scouts. With his selection in the tenth-round of the draft by the Texas Rangers, the kid who would not take no for an answer, who would not surrender his dream, had made it to professional baseball. In his six seasons (1991-96) with the Rangers' organization, the right-hander earned a reputation for pinpoint control and ruthless efficiency. In 1994, Baseball America awarded him the "Best Breaking Ball" in the AA Texas League, and in 1995 Dave was called up for a stint with the Rangers' AAA club in Oklahoma City. His final minor league record was 41-41, with a dazzling 427 strikeouts against only 127 walks. Dave would leave baseball secure in the knowledge that he had never settled for less than following his dream to the end. After retiring from professional baseball, Dave returned to school, earning a B.S. in secondary education from Northeastern Illinois University in 2000 and a Masters in teaching and leadership from St. Xavier University in 2004.
Back