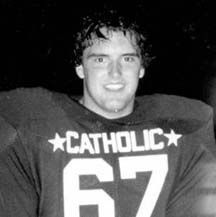 A running back's best friend, iron man Kevin Garvey Ð not at all shy about pancaking linebackers and defensive backs Ð blasted gaping holes as a pulling guard. Tenacious, relentless, and heady, he blended quickness and technique to mold Loyola's ground game into a veritable juggernaut. An impact player, Kevin exuded a confidence and work ethic innate with leaders. His selflessness, moreover, steeled his commitment to excellence. A three-year letterman, Kevin was the first Loyola sophomore to start varsity football. His alacrity and intensity endeared him to coaches and teammates alike; his explosiveness and reputation became the dread of defenses. Similarly, his lunchpail mentality helped solidify his stake to a two-time All-Catholic League selection, a Pioneer Press All-Area recognition, and All-State Honorable Mention, and the school's coveted Michael I. English, S.J. Award for courage and dedication. Kevin galvanized an offensive line that in 1979 and 1980 carried the Ramblers to the semi-finals of the Prep Bowl. The highlight of his senior year, a stunning victory over South Side rival and eventual 1980 5-A State Champion Mt. Carmel, capped a brilliant high-school career. Kevin's work in the trenches drew the interest of many college coaches, and finally brought him a scholarship to Holy Cross. There he continued to dominate as a four-year starter at guard. In his junior year, Kevin helped lead his Crusaders to the Lambert Cup as the outstanding 1-AA team in the East Coast Athletic Conference. He capped off a brilliant career with his selection to the First Team of both the All-New England and 1-AA All-American squads in a final season in which Holy Cross peaked temporarily as the nation's #1 1-AA team.
Back